History: The most important epochs.

William Bilton introduced a new epoch on the Namsen. He published his books “Two summers in Norway”, after two visits in 1837 and 1839. There were salmon anglers on the Namsen before Bilton, but his books were the first written works about the English interest in the Namsen, and it started a big activity from English anglers. He was the first to use the name “Beautiful pool of Speikan” about Speikan on the Moum/Heggum beat. 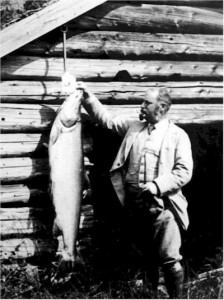 Mr. Frank Dugdale started fishing at Moum in the mid-1880-ies, and he persuaded Erik Moum to move the farm to its present location by the river. The House was built in 1891, from architect-drawings ordered by Mr. Dugdale. He also knew how to get in contact with the inhabitants of the district, by hosting boat races and other sporting events. Dugdale fished at Moum until approximately 1905. 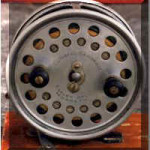 Mr. George Bainbridge came to Moum in 1935, before that he had been fishing at Grong Gaard from 1913. He was about 90 years old when he gave up active fishing. Bainbridge fished at Moum until 1939.

Mrs. Gibson caught her biggest fish: 56 lbs. at the Seem beat. Both Edward and Patricia are buried at Grong Cemetery.

Bent Lind Jacobsen (also known as Peter Pirk) was a Danish angler, and he fished in the period between 1956-1992 (37 seasons). He tried almost everything one can practice in angling and travelled all over the world on fishing trips. His love for Moum was great, and he describes the beat in the chapter “A salmon fairytale” in the book he wrote to celebrate the centenary of the “Copenhagen Anglers Association”. He also wrote a book about the legendary boatman Svein Moum.